It can feel incredibly good to see your e-news subscriber list grow, from the first time you hit the triple digits to the 1,000th subscriber. You’re on a roll when you get to 5,000, 10,000 or more. But at some point, your open or click-thru rates start to stagnate. You can’t get them above some goal or an industry average.

The fact is, on any e-newsletter list there will be people who lose interest or don’t have the time to open and read your messages. Worse yet, your message may be landing in the Gmail promotions tab (a no-man’s land no one wants to be in) or Junk Mail.

Time to clean up your e-news subscriber list through a re-engagement campaign.

Here are the basics of cleaning up your list through a re-engagement campaign:

The subject lines should be obvious and compelling, such as:

Each message should get progressively more compelling. Don’t worry about being corny. After all, these folks probably won’t open the message anyway; they’re already disengaged. The secret of a re-engagement campaign is not necessarily to re-engage lots of people, it’s actually to get the un-engaged people off your list and to increase your open, click, and conversion rates through a core, engaged audience.

The content of these messages should also be short and compelling. The text should read something like this:

We’ve noticed you haven’t opened our e-mails in a while. Maybe you’re busy or maybe our messages ended up in your spam folder.

If you’d like to stay connected, we would love to keep sharing the work we’re doing to XYZ. If you want to stay subscribed, click here: Insert obvious, red button

And if we’re landing in your spam or promotions folder (Gmail users only), be sure to add this e-mail address info@… to your contacts.

Thanks so much for your support,

Subsequent messages should be that brief as well, but change-up the text. Maybe include a link to a video or photo album. If they click on this type of content, it may re-ignite their interest in your cause and/or communicate to the e-mail gods that they are still interested. Seriously, if someone ignores your e-mails long enough, most e-mail providers will begin to filter out your message and send it to Junk. So even one click is a step in the right direction.

Second, go into your e-news system and segment out your non-openers.

You’ll first want to decide what qualifies a non-opener. I worked with iContact for several years and discovered that even though 25-35% of my list was opening each e-news, 50+% of the list had opened at least one message in the previous six months.

I appreciated that 50% “tipping point” and didn’t want to lose anyone in a shorter or longer time frame. So the iContact team segmented out the people who had not opened an e-news in the previous six months for us.

How large should your list be before considering a re-engagement campaign?

But keep in mind that as your list grows, if your engagement rates stay the same, it means you’re engaging more people – congrats!

Third, begin sending your messages. Consider frequency and timing. You may want to send them once a week or send them out rapid-fire within one week to create a sense of urgency. However you choose to do it, DO send each message on a different day at a different time. This will increase your chance of getting engagement from a subscriber who just doesn’t check personal e-mails until the evening. Or one who wants to wait to read your messages over the weekend. It’s true that these are folks who haven’t opened your e-mail at all in six months, but, hey, maybe they want to and just need a nudge (or the right timing).

Here’s something you don’t want to forget: after each message, you’ll want to unsubscribe anyone who opened the e-mail from the next e-mail.

Fair warning: a re-engagement campaign isn’t going to produce a high level of engagement. It would be lovely if that was the result, but it’s not exactly the point. The point of a re-engagement campaign is to give inactive subscribers one last chance to get on the bandwagon. If they don’t, you have lost a subscriber, but your open rates are going to go up. You can’t really lose here.

That depends on many other factors in the e-newsletter program, such as list size, subject line effectiveness, send times, and the ROIs you organize your e-news around.
But, for example, in a 10,000 subscriber e-news program I ran, our open rates steadily increased from the 10-15% range to a regular 30+% open rate. And that’s on top of a 221% increase in subscriber list size!

Here are some charts to illustrate the trajectory of the program. Note how the bounce and opt-out rates will naturally go down as you focus on your core audience and stop e-mailing people who, essentially, don’t want to get the message. 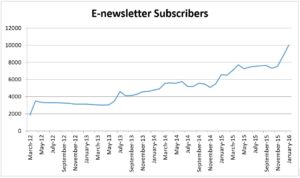 Do you have an e-news list that isn’t so “clean” or “fresh”? Are you working with an e-mail provider who can support a re-engagement campaign? If you have a success story, feel free to post it in the comments.