This post was previously published on the BucketList.org blog in November 2014.

Hang gliding is the perfect bucket list goal for those who’ve always wished for the super power to fly.

A hang glider is a triangular sail with an aluminum frame. This is different from a paraglider, which is more of a parachute. In a hang glider, you’re facing down and forward like Superman, while in a paraglider, you’re in more of a seated position. The two are often confused, with paragliding showing up on more bucket lists, but I’d like you to consider hang gliding too.

Last summer, I went hang gliding at Morningside Flight Park. I drove down to Charlestown, NH on a Friday after work and set up camp next to “The Castle,” a tiny cabin atop a hill on their property. 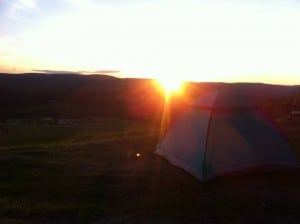 The next morning, after breakfast at Daddy Pop’s Tumble In Diner (no kidding), I met several Morningside staff and Dean who would be my guide for the flight. We climbed into the hang glider baskets, made sure we were secure and gave the thumbs-up to the ground crew.

To get us off the ground (without running off a cliff), an ultralight aircraft towed us down the airstrip, which was actually a mowed field. The training gliders have wheels on the frame, so we rolled along quickly, picked up speed and were suddenly aloft.

I’ve always enjoyed taking off in a plane, so it was incredibly exciting to be so close to the ground and to feel exposed during take-off.

We headed west toward Mt. Ascutney and were eventually level with the 3,100 ft. peak. Dean had already told me that he’d release the cord attaching us to the plane at about that height, so I reminded him I was a bit scared and asked him not to do any tricks until I got used to soaring on our own.

To be honest, I expected a dramatic drop after we were free from the plane. But once Dean unhooked us, there was no drop, nothing dramatic, just a slight loss of tension. The ultralight aircraft veered off (how cool is that guy’s job?) and we were simply floating.

Dean took it easy, then tried some swoops to the left and right. We essentially steered the glider with our weight, which was a surprise to me. I steered for a few minutes, lightly touching the frame of the glider while shifting us left, then right, then faster and slower.

We rode the air down, taking in an amazing 360 degree view of the valley, including farmland, lakes and mountains in the distance. We zoomed in on the landing strip and it was a gentle coast to a full stop.

What struck me as most amazing about hang gliding was the quite natural and organic feel to it all. Unlike skydiving, which involves the scream of gravity and adrenaline, and flying in an airplane, which can involve metal, noise and isolation from the elements, hang gliding was peaceful, even calming. The wind felt manageable, even approachable and malleable, as anthropomorphic as that might sound.

It really felt like flying and is one of the few air activities I’ve considered taking up as a student.

So if you’ve always wished for the ability to fly like Superman, sign up for a hang gliding session soon and don’t be surprised if you land and want to sign up for further instruction!