I started using Sleep Cycle just because I like having stats on and analyzing my life. I even thought I was a good sleeper, so I didn’t anticipate how much this app would change my sleep patterns. (I hesitate to say “change my life” because I’m not an alarmist type of blogger. But I’m thisclose to saying that phrase, just so you know.) 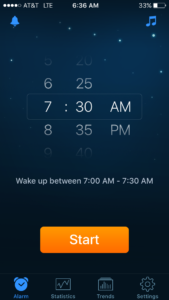 I downloaded the Sleep Cycle app and started to set it up just before bed. It’s simple and doesn’t even require an account or social media log-in of any kind. Really, it’s initially just like an alarm clock, although you’re given a time frame around your desired wake-up time. For example, if you want to wake up at 7:30, Sleep Cycle will wake you up between 7:00 and 7:30.

Why the alarm range with Sleep Cycle?

Because Sleep Cycle is going to monitor your movement and noise throughout the night. As 7:30 approaches, it will wake you up when you’re in your lightest sleep mode.

How does Sleep Cycle do this?

Sleep Cycle monitors the noise you make through your phone microphone. Alternately, you can set it on your mattress and use your phone accelerometer to monitor your actual movement. The app says it can differentiate between two people in the same bed, so long as the phone is placed correctly for each function. 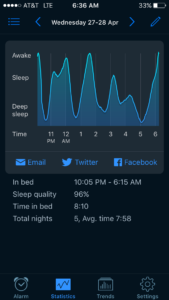 After one night with the app, I got a nifty chart like the one to the right:

I was surprised to see the ups and downs of my night since I considered it a good nights sleep. And I still felt good, so I wasn’t worried.

The alarm went off shortly before my usual time…and this was where things got interesting. Even on the first morning, I woke up immediately. I checked the chart and thought my eagerness was possibly due to curiosity about this experiment. But after two nights, three nights, and more, my mornings began to COMPLETELY change.

I woke up – and stayed up – when the alarm went off. I was being gently pulled out of sleep at the lightest point in my sleep cycle rather than being wrenched out, come hell or high water, at 5:00 am. One morning, I even tried to go back to sleep, but I was up for good.

The cascading effect of this app is not to be underestimated. Being fully awoken by the alarm, I had the alertness and energy to get up, drink water and hop on my bicycle trainer for exercise. From there, I made myself breakfast and headed off to work refreshed. This didn’t always happen, but it was a marked improvement from my previous routine, when I was often at risk of hitting the snooze button, waking up fatigued and heading to the coffee shop for breakfast just before making it into work on time.

I now know that we do harm to ourselves with unnatural wake-up times and abrupt alarm clock patterns.

The fun times continued, though. I used the app for several months and got charts that mapped my nightly and weekly patterns. I was even able to input “sleep notes;” when I’d had a beer, a bath, evening exercise or any other activity that might have affected my sleep. I was surprised to learn that taking an evening bath slightly decreased my sleep quality, which is a major disappointment actually! 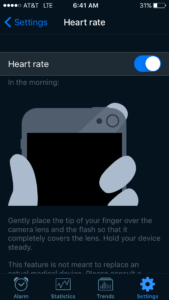 I quickly signed up for the premium account, just $1.99 per year, plus tax, to get access to the heart rate monitor and the mood gauge. With the heart rate monitor, I put my finger over my phone camera immediately upon waking. The app would get my heart rate and begin to log the data. I was also able to select one of three moods, from bad to neutral to good, although I didn’t see any correlations there. For example, my wake-up mood was getting consistently better, regardless of how well I slept that night. It seemed the alarm clock feature was the most important to me.

The charts are also fun, as they compile and compare data from around the world. So we can see that my average bedtime was 10:09, while the US average was 11:39 for the week from which I grabbed these screenshots. South Africans had the earliest national average while the Greeks were out until I was almost waking up! 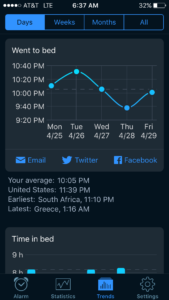 This app has so many features, including integration with RunKeeper. It’s worth the gear-head or data-geek investment. But it’s also a worthwhile investment for anyone who wants to improve their sleep quality.

Like I mentioned previously, I thought I was a good sleeper. Even in times of stress, I have rarely had a hard time falling asleep or staying asleep. And even with some struggle, I can wake up pretty early. But with the app, I began learning what helped and hindered my sleep. And the alarm clock was a foundational pattern changer.

The Sleep Cycle app is currently free in the iTunes store. The upgrade isn’t necessary, but the extra functionality of heart rate is worth it alone. Check it out. Tell someone how well you think you sleep now. Give the app a try for a week and check in with them. The results may surprise you!

Postscript: I wrote this post in the past tense, and used screenshots from a recent week, because I’m not currently/regularly using the app. I’m doing a lot of traveling right now, and camping, and the birds and sunshine are a natural and reliable wake-up call. As soon as I land, though, I’ll get back to using the app.

I just checked and The subscription price is $.83 a month, so around $12 year. I like the app so far so I’m going to give premium membership a try.

Yes, it’s definitely worth it! Glad you’re going to give the premium membership a try.

I have started trying this app again. My concern is the fluctiation in the graph. Maybe I’m up more than I think at night, albeit briefly, I guess. But still concerning, but I like it. Not enough for the premimum yet.

I’m glad you’re trying the app, Peter! I’ve wondered how it all works too. For example, how does the app take into account background noise like a fan or a heating/cooling system revving up?

I just googled the current premium price for Android and it said $29.99 / year. Really worth it?

Hi Carol! If you’re really working on your sleep quality, YES. If it’s just for fun and you may stop using it after a month, then maybe not. Hope this helps!