And here’s what I found: 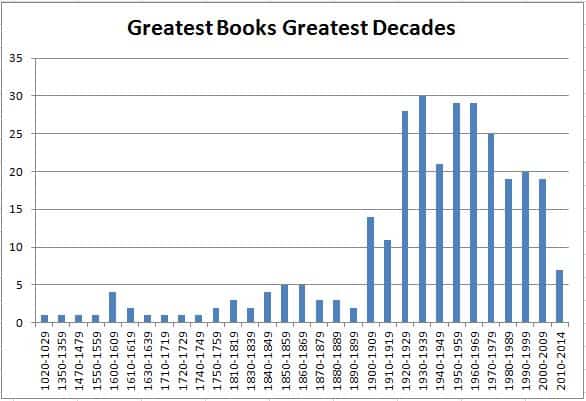 The decade from 1930-1939 saw 30 books published that ended up on the various lists I culled for this Greatest Books list.

The Greatest Decade for Literature:

Clearly, the Greatest Books list is biased against very, very old books, which may have been lost in time or not had access to large audiences, and also very new books, which may not have had the chance to win awards and stand the test of time yet. But, this has been a fun experiment nonetheless.

It’s made me think about historical events and conditions that may have helped create great writers or their great works.

Have you thought about your favorite works of literature and when they were published?

Would you agree or disagree that the 1930s was the greatest decade for literature?

2 Comments for “Were the 1930s the greatest decade for literature?”

[…] I’ve discussed before how the 1930s were the most prevalent decade overall on the Greatest Books list, with 1934 being the most represented year on the list. One […]