I’ve been working on a “greatest books” list for several years now. I recently reorganized my list and double checked my sources. My version of a “greatest” list comes from Pulitzer and National Book Award winners, Modern Library’s 100 Greatest Novels, and a list of lists from GreatestBooks.org.

As I added more details, I started to wonder if there were trends in these data points. 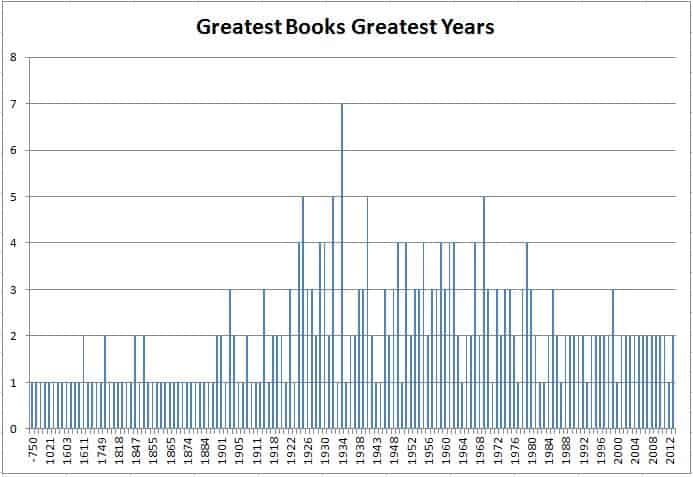 The “Greatest Books” published in 1934 were:

I was surprised by this. I didn’t recognize all of these titles, though I did recognize most of the authors.

Obviously, the Greatest Books list is biased against very, very old and very new books. But, this has been a fun experiment nonetheless.

It’s made me think about historical events and conditions that may have helped create great writers or their great works. Also, it’s revealed social trends and an author’s popularity streak.

Have you thought about your favorite works of literature and when they were published?

Would you agree or disagree that 1934 was a greatest year for literature?

2 Comments for “Was 1934 the greatest year for literature?”