Mustang (2015), directed by Deniz Gamze Ergüven, is a study in the unbridled power of girlhood. Five sisters, strong, powerful, wild, tender, and bonded closely to one another, are caught at the precipice of womanhood. Their grandmother and uncle attempt to shove them into adulthood (or, rather, lock them up and give the key to adulthood away to their future husbands).

The results are sad, inspiring, tragic, endearing, and unexpected. 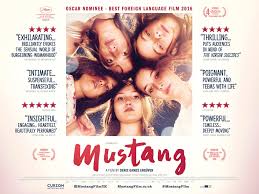 The film starts with the girls leaving a beloved teacher at the end of the school year. Although sad, they bounce off with a group of boys and end up playing at the beach. Just before heading home, the girls sneak into an orchard and eat apples. They are forced out by an old man with a gun, but this metaphor of Eve and the Garden of Eden thrust us quickly into the heart of the movie. The aforementioned play with the boys is decidedly innocent, but once the girls get home, they are accused of “rubbing themselves on the boys necks!”

The girl’s grandmother means well. She’s raising the girls on her own, with a little help from her son, their uncle. But Grandma realizes she needs to build a tower around her girls in order for them to be attractive to suitors very soon.

The big adventure arrives when a football team has a women’s only day. The girls sneak out of the house – no easy task – and make it all the way into town via walking, hitching, and a wild bus ride. As the older folks gather around the TVs back home, their grandmother and aunt spot them on the TV screen at the tournament. Before the menfolk (violent and sexist) can spot them, the aunt does a great job at taking down the whole town’s power grid to prevent the retribution.

Afterwards, the house goes on lockdown. The walls get taller, the second and third floor windows get barred up, and cooking and sewing classes turn their home into a “marriage factory.” They meet each trial with their own rebellion. Sometimes one sneaks out, sometimes they lounge around and waste the days, sometimes they run away, and sometimes they even find the little blisses of domestic work, like learning how to make chewing gum from scratch. 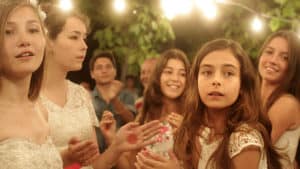 But one by one, the girls are married off. It’s hard to grasp, since we were just introduced to them as young girls on the cusp of puberty. But the first one is betrothed to a boy she doesn’t like. Luckily, the second one makes enough of a scene to be “given” to her actual love. As the wedding days approach for each wild child in this pack, the results are unique with each one.

The mainstay in the story is little Lale (Güneş Şensoy), the youngest. She’s the fiery blend of all the girls: stubborn, tomboyish, powerfully feminine, young, innocent, unable to accept the sexist system she’s barreling toward. She wants to go to the soccer games, learn how to drive, and just go see her teacher in Istanbul.

She befriends a truck driver, Yasin (Burak Yigit), who picks her up all the various times she runs away, teaches her to drive, and eventually rescues her on her final escape from the house. I won’t include too many spoilers in this review, but this movie is a substantial story, worth the viewing time. It’s easy to get invested in each character and root for her as she lives out her own unique story.

Mustang is based on the directors own life and childhood. It’s set in a rural Turkish town. And although it would be easy to view the closed-minded values of the town as religious, they are, in fact, not. There’s not a mention of religion or church in the film. Instead, the sexism, the value system, and the limiting opportunities are entirely secular. 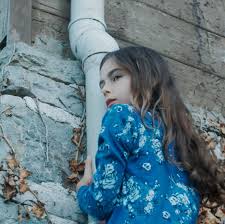 Most notably, for me, the film never lingers over the girls in that slow, sexual way many films do. So many filmmakers can trace the hair on a young girl’s arm in such a Lolita kind of way that the male gaze is undeniably present and uncomfortable. Instead, Ergüven portrays the girls with innocence and power. They and the camera are one. We do not have a filter on the lens telling us that this girl or that one is the object of desire. Instead, we have their personalities, dialogue, and humanness to show us their fully developed characters. Through the five girls, and the men and women who surround them, we get to see a value system played out in many distinct ways.

The movie is fun and well-paced. It’s also tragic and sad – viewers will be heartbroken or frustrated with more than one of the storylines.

The audience score on Rotten Tomatoes gives Mustang an impressive 85%. Have you seen the film? If so, did you identify especially with one of the girls?

If you haven’t seen the film yet, you can check out the trailer here: