Sweet Bean (2015), directed by Naomi Kawase, is one of the most aesthetically pleasing films I’ve seen in the past few years. It’s a slow stroll through cherry blossom season, with each character and storyline finding their own rhythm and pace.

Sentaro (Masatoshi Nagase) opens the movie with a slow, lumbering gait. He practically drags the viewer into work with him. Tokue (Kirin Kirie) hobbles into Sentaro’s pancake shack (more on this later) in a somewhat starstruck manner. She marvels at the trees, the wind, the possibility of working for Sentaro, and the viewer is easily pulled alongside her for the rest of the film. Wakana (Kyara Uchida) is a young teenager who visits the dorayaki shop Sentaro runs and gently brings all of the characters together. 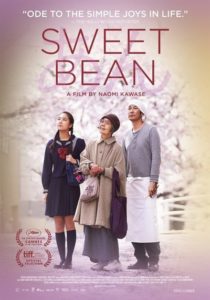 With these three, we drift down an emotional river of friendship, curiosity, and exploration.

Sentaro runs a dorayaki shop. Dorayakis are made of a sweet bean paste spread between two small pancakes. Sentaro is brooding, silent, and none too pleased when tottering Tokue approaches his shop and wants to work for him. She’s in her 70s and seems frail, possibly even ill. Wakana, the teenager, does not have a supportive home life, but she visits Sentaro every day and he provides her with leftover dorayaki. She encourages Sentaro to hire the older woman.

Hiring her doesn’t happen quickly, though. Not until Tokue returns with her own bean paste, which impresses him so much that he relents. We then journey, again slowly, through a long day preparing the bean paste. Up well before dawn, Tokue has an intuitive sense of how to make the bean paste. For example, she can sense the smell of the steam changing and knows it’s time for the next step in the recipe. Sentaro, who usually gets his paste from a metal, industrial can, is both exhausted and intrigued by this process.

By 11:00, when the shop opens, both workers are tired and hot, but they begin selling their dorayaki. Of course, it’s a hit. The next day and the next, customers are lined up outside. Sentaro is amazed and Tokue is struck, like a pixie, with all of this new activity in her life. 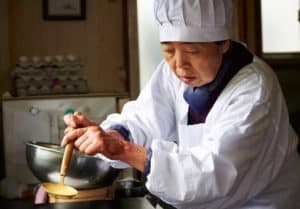 Of course, we see some of the age and illness Tokue is carrying with her. And this provides the central problem of the movie. Tokue had leprosy. She is cured now, but from a young age was confined to a compound. In 1996, when the 1953 Leprosy Prevention Law was struck down, people with leprosy were allowed to leave confinement. Still, during the time frame of this movie, prejudices have persisted and Sentaro sees a quick drop in business once word spreads that Tokue is working with the food.

Sentaro lets her go, sadly, but Wakana, in an attempt to run away from her own home, encourages a visit to the compound to give Tokue her favored pet bird. The two have formed a sweet bond throughout their shared time in the shop.

Wakana and Sentaro find Tokue at the compound and it’s actually an extraordinary place. The grounds are beautiful, the people are, yes, deformed, but talking and laughing in community, and their food and clothing seem superb. They find Tokue and a friend in the lunch hall and learn more about her back story. Having been confined to the compound for so long, it was always her dream to get out and someday work at a dorayaki shop. Sentaro made that dream come true, even though Tokue has aged a lot in just the few months since she was let go from the shop. 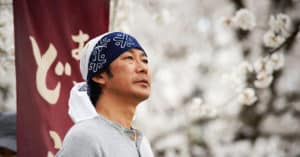 The end of the movie takes an almost inevitable tone of wisdom and dignity associated with age. But each of the characters has quietly twisted and turned with the wind to find a deeper sense of being, of being alive, or making meaning out of their situation.

Sweet Bean is touching without being saccharine sweet. It’s a metered movie, but it never felt slow to me. Peaceful moments in the natural world, with trees and the wind, are interspersed with busy city scenes and bustling shop scenes. Throughout, we have Tokue’s pixie presence and Sentaro slowly lightening his spirit. Wakana, while being a slightly more minor player in the story, nonetheless prompts the plotline at key moments. 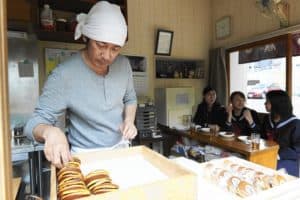 Rotten Tomatoes viewers were also keen on the movie, giving it a rating of 85%. I rated the film so highly because the characters were well-developed and we never got too much or too little of their back story. The ending was somewhat predictable, but the film offered a meditation on right livelihood and relationships. I laughed, I cried, I smiled, and I wondered what was next for each character.

Here’s the trailer for the film. Have you seen the film? Tell me what you think in the comments below.