I was really pushing it by heading toward Sequoia and Kings Canyon National Parks in late July. Not only was it a busy time of year for the parks, but it was hot. Too hot. So hot that I only stayed for a few days and eventually headed toward the California coast.

But what I saw in Sequoia and Kings Canyon National Parks were mesmerizing, large trees and a park administration working very hard to re-preserve (I’ll explain that later) a region that was nearly destroyed by its own popularity. I was impressed and so glad I went. 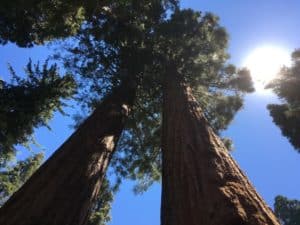 Still, my landing in the parks wasn’t soft. I was traveling without reservations to any of the campgrounds and was told they were all booked up at the park entrance. I headed back into Three Rivers, CA and found a decent little campground. The owner was friendly, but I ended up with a campsite with no tree cover. This wouldn’t bode well for 100+ degree days nor the nights when it didn’t go below 80 degrees. I was glad to have a place, though, since the sequoia have long been on my bucket list, along with redwoods, as trees I need to see.

After settling into my campsite and getting my bearings in town, I headed back into Sequoia National Park the next day. I decided to take the scenic road through the park, up to the “top,” and to make a few stops along the way. The Generals Highway gains nearly 5,000 feet. It’s slow-going on the way up, with hairpin curves, the usual tourist rubbernecking, and narrow or non-existent shoulders. I found out that it’s even worse on the way down. Even with an automatic car, I had to downshift to my lowest gear so as not to burn out my brakes. The Generals Highway, though, provides some stunning views of the valley, of the Sierra Nevada, and, eventually, of majestic sequoia groves.

Up at the higher elevations, the weather was cooler and I got a welcome reprieve from the hot valley sun. I explored the General Grant Tree Trail, with one of the world’s largest living trees, the General Sherman Tree, and The Big Trees Trail. And while the trees-named-after-men were very impressive I truly loved The Big Trees Trail. This is where I learned the most about sequoia – and the interpretive signs were written so compellingly!

It was here I learned about “hot spots:” where fire moves through the forest, creating ideal conditions for sequoia to eventually grow. Here’s more, from an interpretive sign: “Sequoia cones open when fire’s heat rises. Soon tiny seeds drop to the ground. If they fall onto a layer of dry leaves, they will not survive. On soil left bare by fire, they can take root.” Therefore three, four, or five sequoia can sometimes be seen: they may be the offspring from an older sequoia burned in an earlier fire right in the middle of them. This kind of information gave me new eyes for the forest and I could see many more groupings like this through the rest of my walks. 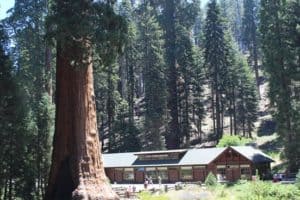 I mentioned the preservation work going on within the park. A great example is the site of the Giant Forest Museum. Currently, there’s the Museum, a well-maintained parking lot, and accessible, although protected, hiking trails. Previously, though, the Museum was a market, plus a cafeteria and gift shop in second building, and another gift shop in a third. Nearby, formerly, were three motels and dozens of cabins! These properties, plus all their foot and car traffic were damaging the roots of some of the largest and most beautiful sequoia in the park!

I’m not sure when the shift in park management happened, but an interpretive sign showed a very busy market as late as 1996. Some of these trees are 3,000+ years in the making, so I’m so glad the policies have shifted.

I was also astonished at the upended sequoia – their bases are works of art from nature and I spent a lot of time photographing and even just contemplating many of them. The Big Trees Trail circles Round Meadow, not far from the Museum. Make this area your main stop if you only have a few hours for the park. 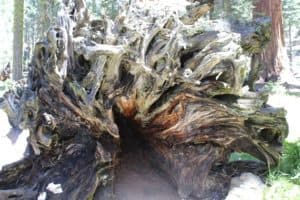 The Museum too is worth the visit! So far, it’s been one of the most beautiful I’ve seen on my road trip. I appreciated the display which compared sequoia with other recognizable landmarks, like the Statue of Liberty, the Titanic, redwood trees, and a spaceship. The tallest sequoia beat them all.

I didn’t spend much time in the northern part of this park partnership, Kings Canyon National Park. I did drive through it, though, and meandered, outside the park, back to Three Rivers. I thought the Generals Highway was intense, but Route 245 was tortuous as well. I probably dipped down to 5 or 10 miles an hour for most of that ride. In retrospect, I shake my head and laugh at the adventure of it. 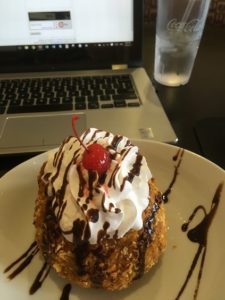 Aside from my trips into the parks, I spent a lot of time in Three Rivers too. But the campground and my tent were always too hot until late evening, so I frequented the Sequoia Cider Mill, Antoinette’s Coffee & Goodies, the Pizza Factory, and the Sequoia Snack Shack. The Sequoia Cider Mill had great food and fried ice cream, plus electrical outlets in the booths, so I could plug in and work. Antoinette’s was a lovely coffee shop and a welcome respite from the heat.

But after a few days, I knew I had to head west and get away from the heat. Had I found a campsite in the park, at a higher elevation, in a shaded area, I probably would have had a much better visit. Now I know and I’ll plan accordingly next time. Because there will be a next time – I’d really like to see the big trees again and explore Sequoia and Kings Canyon National Parks much more.